I’m reading The Mirror and the Light by Hilary Mantel right now and one of my favorite characters across the trilogy is the painter Hans, the younger Holbein. Throughout the books, Hans is busy painting portraits and I thought it would be fun to bring together the paintings referenced in the novels.

One of my favourite parts of Wolf Hall is when Thomas Cromwell gets to look at his own portrait, as painted by his good friend Hans. Perhaps he might have felt a bit better about it if he had looked at Hans’ self-portrait too. As it is, Cromwell has to content with himself with his son, Gregory’s casual surprise that his father hasn’t always known he has the face of a murderer.

By book 3, Gregory is old enough to be married and his busy father pairs him up with no less than Queen Jane’s sister, Elizabeth. Here they are: 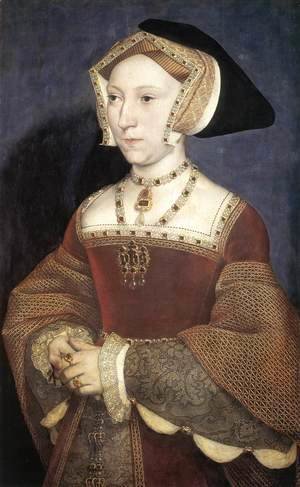 Which takes me to other royal women. Here’s a Holbein sketch believed to be Anne Boleyn and his portrait of Henry’s fourth wife (for all of six months) Anne of Cleves. Now I am only on p579, but I’m pretty sure this portrait will rate a mention before the story is complete.

And what about Henry, the ‘mirror and the light’ I believe (or at least the mirror anyway… Cromwell might be the light. Again, I’ve not finished the book yet.) Here he is in all his familiar glory…

Holbein’s time spent painting this next picture (or as it was then, mural, on the walls of Whitehall) also comes up in The Mirror and the Light. Even though the original (as well as the portrait of Henry above) was destroyed by a fire in Whitehall in 1698, thankfully there was a strong tradition of copying famous and well-loved images. Here then is a copy of Holbein’s mural of Henry and Jane, imagined with Henry’s parents, Henry VII and Elizabeth of York. 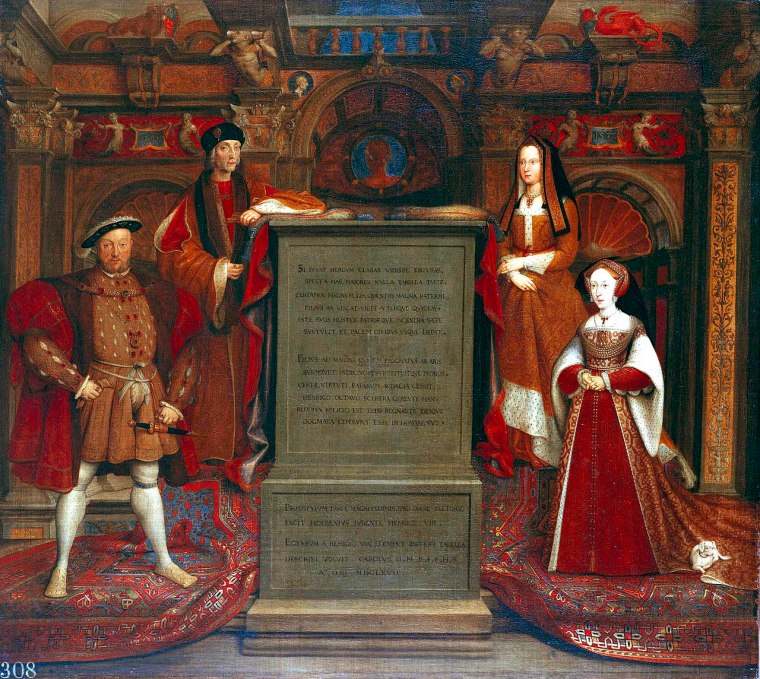 But where I started all this today, was with a description in the novel of Holbein painting of someone who is barely a character at all. Meeting the new French ambassador, Marillac, Cromwell mentions a previous ambassador, Dinteville, now disgraced. He “thinks of the ambassador, muffled in his furs, splendid as Hans painted him: the broken lute string, the skull badge he retained in his cap.” Here he is on the left:

With under 200 pages to go, I wonder how much more I will hear or see of Hans Holbein? If anything comes up, I’ll be sure to come back and update this post!

….. and I’m back! I flew through the last chapters and have a couple more Holbein portraits to add for the record. First here’s Christina of Denmark (also somewhat confusingly to my mind, the Duchess of Milan) who Henry seems to favour in looks over Anne of Cleves. Not sure I’m seeing what he was seeing but you can make your own mind up… 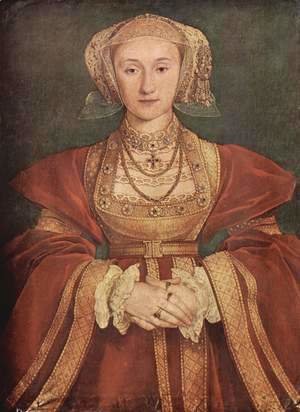 And lastly here’s Henry’s son Edward, whose painting gets a mention when it is presented to the King as a gift. Yet another incredible painting!