“Mad Marriages” was the title of Elizabeth Cochrane’s second article for The Pittsburg Dispatch. Marriage and divorce was a topic Elizabeth had strong views on, and in her article she weighed in on divorce law reform as well as her concern that both parties to a marriage really knew each other, warts and all.

Her own family history – her father died when she was six and her mother remarried but then divorced in 1879 – was clearly at the forefront of her mind as she wrote. So, most likely, was her brother Albert with whom she would have a contentious relationship throughout her life. The article was opinionated, strident and intended to provoke debate. It was also published under a new byline.

George Madden, recognising Elizabeth’s great potential, didn’t want to publish “Mad Marriages” with the Lonely Orphan byline. She needed a name, but as was customary at the time, it couldn’t be her own. 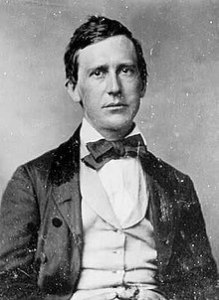 He called into the newsroom for suggestions and, from among the replies, picked out Nelly Bly. The name came from a popular song, written in 1850 by Stephen Foster, known as ‘the father of American music’, and a Pittsburgh native.

Madden misspelled Nelly, as Nellie and Nellie Bly was born.