It has been a thrill to work with Crooked Cat Books on the cover of The Girl Puzzle. One of the benefits of publishing with a small press is the involvement the author can have in cover design. I’ve been to events with much bigger authors than I am, where they’ve talked about issues with their covers. In a recent example, an award winning historical novelist talked about how she felt the image of the woman on her book wasn’t either the right age or even the right period for the character in her book!

Covers are complex beasts. I’d been thinking of what kind of cover might work for this story and these two had caught my eye:

I sent those into Crooked Cat and a little later back came this – something so much better than I could ever have anticipated: 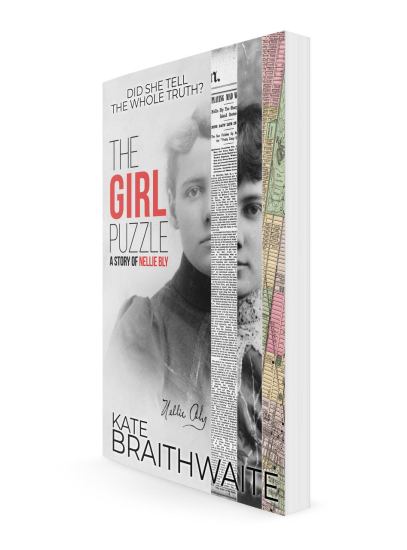 Truth be told, it took us a bit to pin down the images. There are copyright issues to think of, especially in a case like this when the book is about a real person. But here are the full photographs of Nellie Bly.

They are both dated 1890 in the Library of Congress but I think she looks quite different in each one so I’m not sold on that. I’d not normally rush to question the Library of Congress… but then their records also don’t match on her date of birth. One says 1864 and the other says 1867. To be fair, this confusion originates from the lady herself. Nellie Bly was known to fudge a little on her age. On her round the world trip in 1889, Nellie applied for a passport at the American Legation in London. Without it, she would never have completed her round the world adventure. In his book, Eighty Days, Matthew Goodman describes the moment perfectly: 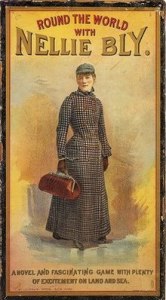 “… the trip was a necessary one, for it had allowed her to obtain the passport that would make the rest of her journey possible. That passport, with Second Secretary McCormick’s official seal on it, was now safely tucked inside her gripsack. Not until many years later would it be discovered that Nellie Bly had sworn to Robert McCormick that she was twenty-two years old.

But back to the cover of The Girl Puzzle…

Here is the map we ended up using. I don’t have the rights to this one, but happily my designer does and he has done a brilliant job of picking out a slice of New York that works really well. Although one of the timelines in The Girl Puzzle is very much focused on Blackwell’s Island (now Roosevelt’s Island), Nellie Bly lived in New York for a large part of her life – including in my second timeline, from 1919 to 1922, so I think this slice is just perfect!

But what about that strip of newsprint? Now that might be my very favourite bit of all. Here’s the full image of The Sun newspaper from Friday October 14th 1887. If you decide to read The Girl Puzzle, you’ll find out how that article fits into Nellie’s story – not just in what happened in asylum… but in what happened to her after she left. Oh, and here’s a link to it online so you can zoom in and read at your leisure.

So that’s the cover story! I certainly hope the cover makes you want to read the book. The paperback has a wonderful back cover too (I love it nearly as much as the front!) but that won’t be available until May 5th.

In the meantime, here’s the pre-order link for the kindle version. Nellie has a great story. I hope you’ll want to find out more.