Susan B. Anthony has been in the news lately. This year is the centenary of women (well, white women) getting the vote in America and then there has been a little bit of extra controversy about a presidential pardon. In 1872, Susan B. Anthony set out to cast a ballot in a presidential election. Firm in her belief that the Fourteenth Amendment gave her – as a US Citizen – the right to vote, she entered a barbershop in Rochester, New York, and persuaded the men working there as registrars, to register her and three of her sisters and allow them to vote in the election.

As a citizen, she declared, she had the privilege of voting, and she cast her vote for the Republican incumbent, President Ulysses S. Grant. (He won.) But Susan B. Anthony’s action, as she probably expected, did not go unnoticed. She ended up being arrested some days after the election and was charged with knowingly, wrongfully, and unlawfully voting. She was tried, found guilty and fined $100 – a fine, it should be noted, that she never paid. Her actions brought national attention to the question of equality.

Twenty four years later, Susan B. Anthony was interviewed by the journalist Nellie Bly. In early February, 1896, Anthony was just days away from her seventy-sixth birthday and Bly was thirty-one. Anthony had spent her life devoted to women’s rights. Here’s Bly’s first impression:

She sat in a low rocking-chair, an image of repose and restfulness. Her well-shaped head, with its silken snowy hair combed smoothly over her ears, rested against the back of the chair. Her shawl had half-fallen from her shoulders and her soft black silk gown lay in gentle folds about her. Her slender hands lay folded idly in her lap, and her feet, crossed, just peeped from beneath the edge of her skirt. If she had been posed for a picture, it could not have been done more artistically or perfectly.

In typical Nellie Bly style, the interview is wide-ranging and moves seamlessly from the serious to the personal and back again. Read it and you will learn how Anthony came by her middle name (Brownell), what she liked to eat for breakfast (fruit, grain and coffee), and how many times she had fallen in love. You’ll discover a sharp intellect – she begins by asking her interviewer her own question about current events in Cuba – and a keen memory, as she describes with great good humor her years as a teacher. She lays out how she came to see that voting rights was the battle that had to be won before all others. In her own words:

Susan B. Anthony looks very serious in this portrait, but Bly brings her to smiling life in her seven column interview. Anthony comes across as approachable, humorous, and intelligent, but also very human, rooted in her family, relentlessly committed to her cause, and full of optimism for the future. From her views on flowers, bicycles and bloomers, to her committed temperance (she never tasted alcohol in her life), Susan B. Anthony fully comes to life in this interview. As such, it is also a tribute to Nellie Bly’s skills as a journalist, her readiness to ask questions big and small, and her ability to bring her subject’s voice and character to her readers’ attention. In Nellie’s own words, “Miss Anthony enjoys a good joke and can tell one. She never fails to see the funny side of things though it be at her own expense.”

Anyone curious to quickly know Susan B. Anthony, beyond the standard biographical record, could do a lot worse than read this whole interview. It’s available on line as a pdf here, and photographed for slightly easier reading here. But as internet resources come and go, and as has been my habit during my research for The Girl Puzzle, I’ve also transcribed the whole thing and you can read it here. I hope you will!

If you know about Nellie Bly at all, you most likely know that she went round the world by herself in 72 days in 1889/90, or that she got her first break into New York newspapers by feigning madness and getting herself committed to Blackwell’s Island Insane Asylum in 1887.

But there was a lot more to Nellie Bly than that. Here’s a perfect example: Nellie reporting for the New York Evening Journal on the March 3rd Suffrage March in Washington D.C. in 1913. There are some great little videos about it on YouTube. Here’s an example:

“Can you imagine it? Ten thousand women in line? They say that was the number by actual count… Picture if you can an endless chain of butterflies, divided into sections according to color fluttering along and it will give a little impression of the parade which made history… I was never so proud of women; I never was so impressed by their ability; I never so realized their determination and sincerity. I am glad I am one.” 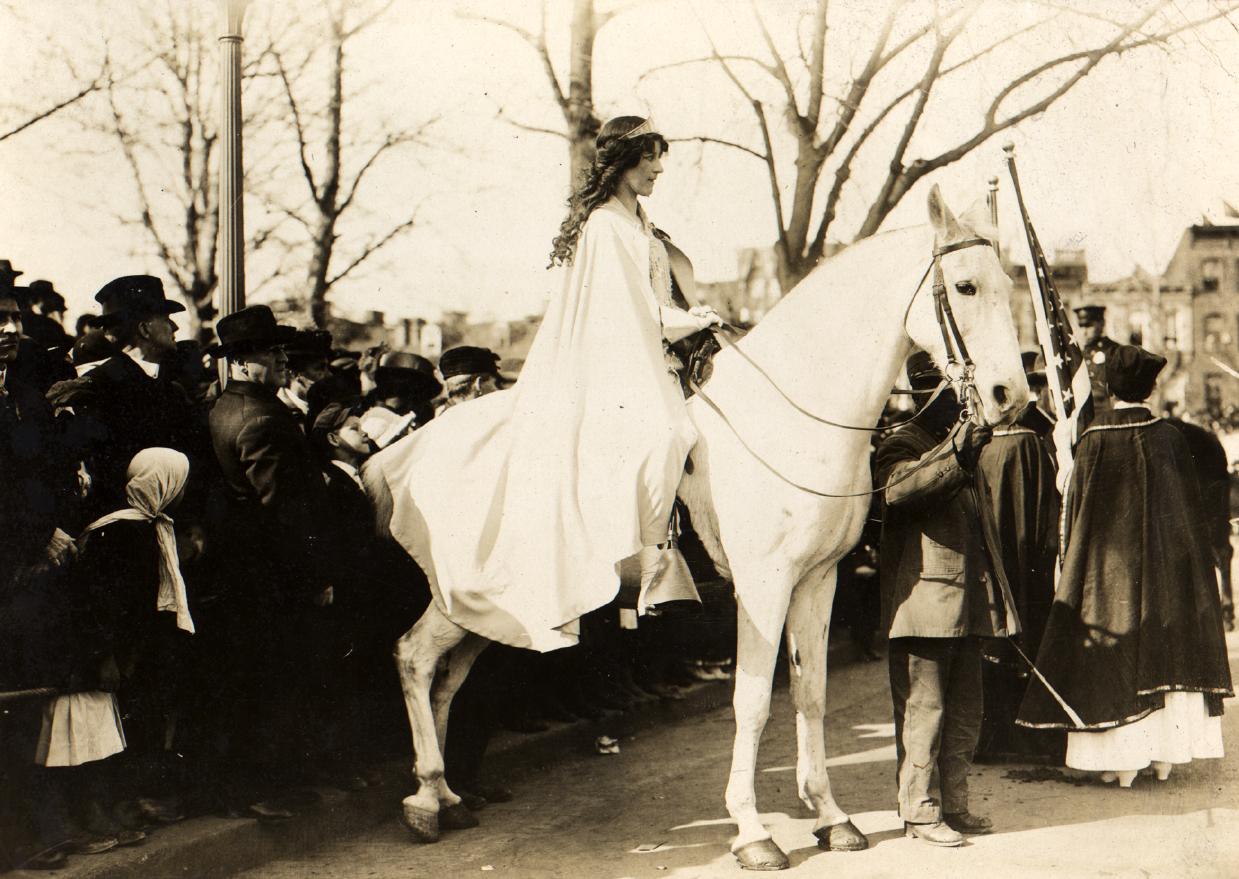 The suffrage march was led by this woman, Inez Milholland, a lawyer, feminist and pacifist who probably deserves a novel of her own. She’s definitely someone worth celebrating.

When the suffrage movement got its makeover on

“The story of how and why a group of prominent and influential men in New York City and beyond came together to help women gain the right to vote.

The Suffragents is the untold story of how some of New York’s most powerful men formed the Men’s League for Woman Suffrage, which grew between 1909 and 1917 from 150 founding members into a force of thousands across thirty-five states. Brooke Kroeger explores the formation of the League and the men who instigated it to involve themselves with the suffrage campaign, what they did at the behest of the movement’s female leadership, and why. She details the National American Woman Suffrage Association’s strategic decision to accept their organized help and then to deploy these influential new allies as suffrage foot soldiers, a role they accepted with uncommon grace. Led by such luminaries as Oswald Garrison Villard, John Dewey, Max Eastman, Rabbi Stephen S. Wise, and George Foster Peabody, members of the League worked the streets, the stage, the press, and the legislative and executive branches of government. In the process, they helped convince waffling politicians, a dismissive public, and a largely hostile press to support the women’s demand. Together, they swayed the course of history.” (Amazon blurb)

Why read The Suffragents?

Lots of reasons. For one, this book is by Brooke Kroeger. I’ve just used her biography of Nellie Bly extensively in writing my new novel, The Girl Puzzle. Her research is thorough (the index and references/sources are amazing) and her writing style is a pleasure to read. Then there’s the subject matter. I definitely feel that suffragette stories have great novel potential. I’m not sure I’m the woman to do one, but what some of these women went through should be celebrated and remembered. When the 2016 US election was going on my tween/teen kids were SHOCKED to find out that women only got the vote in the US in 1920 and 1918 in the UK (although only for women over 30). I’d love to see some new suffragette movies or books to keep us all aware of how short a time its been since women had equality at the ballot box.