It is a truth universally acknowledged that Jane Austen did not write enough books. Only six. Six! And those six are so well loved that a whole industry has risen up to supply the unending demand for more things Jane. I’ve read my fair share, with mixed feelings in some cases, but this latest one to come my way was a pleasure to read from start to finish. 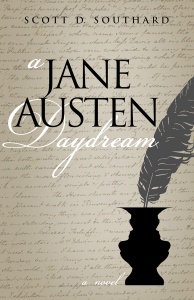 The book in question is A Jane Austen Daydream by Scott D. Southard.

The key word here is ‘daydream’. This novel is a fictional – almost speculative – biography of Jane Austen in her twenties. While Southard uses lots of biographical facts about Jane and her family for his plot, this is not in any sense a dramatization of her known biography. Instead it’s an imagined life, a what might-have-been (but probably wasn’t). And it’s a lot of fun.

The novel opens – in the spirit of Pride and Prejudice – with Jane and her elder sister Cassandra being invited to a ball. Mrs Austen, very Mrs Bennett-esque, is greatly excited at the prospect of marrying off her two daughters, and Jane, to be fair, is equally ready. Having heard from a gypsy that she will fall in love, when Jane encounters a handsome, eligible young man in the library at the ball, she is more than ready to cast him as her husband-to-be. But ‘the other Austen daughter’ – as she is known in a clearly disparaging contrast to Cassandra – does not find her path to love, or publication, runs smoothly.

Southard’s Jane is an engaging, witty character. She is a little silly at points but matures nicely and learns from her mistakes (think Emma, anyone?). Jane’s search for success in love and literature had me turning the pages, and the cast of characters surrounding her is well-drawn and often amusing. I particularly liked her brothers, both in terms of their characters and their crisp and engaging dialogue.

Because Southard’s main character is Jane Austen, her every exchange offers an opportunity to link to the books that we all know and love. Jane’s story parallels those of her literary creations at times – especially Elizabeth Bennett and Anne Eliot. She meets a Mrs Catherine de Bourgh, a Mary Crawford, and a man putting on a performance of Lover’s Vows, the play that caused so much distress to Fanny in Mansfield Park. There is a comic Reverend, a best friend called Harriet… I could go on, but I won’t spoil the fun.

Serious bravery is required to take on Jane Austen and mess with her in fiction. Janeites know their stuff. Even non-Janeites (like me) know quite a bit. I’ve read all the books. Some of them several times. And I’ve a sketchy knowledge about Jane Austen’s life, at least in terms of her death and love life. But I’m confident that fans of Austen who open this book in the right spirit – ready to be entertained and enjoy a Jane that might not quite match up to their own preconceptions – will thoroughly enjoy their trip to a well-written, witty Regency England, full of references to those six wonderful books. Highly recommended.

Scott D. Southard, the author of A Jane Austen Daydream, swears he is not obsessed with Jane Austen. He is also the author of the novels: My Problem with Doors, Megan, Permanent Spring Showers, Maximilian Standforth and the Case of the Dangerous Dare, and 3 Days in Rome. With his eclectic writing he has found his way into radio, being the creator of the radio comedy series The Dante Experience. The production was honored with the Golden Headset Award for Best MultiCast Audio and the Silver Ogle Award for Best Fantasy Audio Production. Scott received his Master’s in writing from the University of Southern California. Scott can be found on the internet via his writing blog “The Musings & Artful Blunders of Scott D. Southard” (sdsouthard.com)  where he writes on far-ranging topics like writing, art, books, TV, writing, parenting, life, movies, and writing. He even shares original fiction on the site. Currently, Scott resides in Michigan with his very understanding wife, his two patient children, and a very opinionated dog named Bronte.