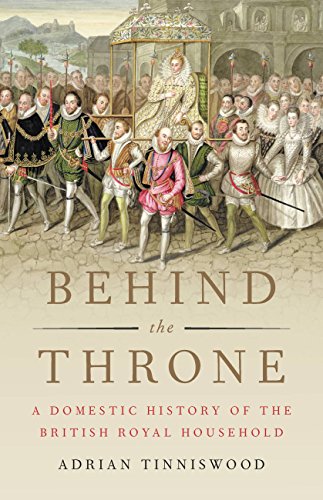 Monarchs: they’re just like us. They entertain their friends and eat and worry about money. Henry VIII tripped over his dogs. George II threw his son out of the house. James I had to cut back on the alcohol bills.

In Behind the Throne, historian Adrian Tinniswood uncovers the reality of five centuries of life at the English court, taking the reader on a remarkable journey from one Queen Elizabeth to another and exploring life as it was lived by clerks and courtiers and clowns and crowned heads: the power struggles and petty rivalries, the tension between duty and desire, the practicalities of cooking dinner for thousands and of ensuring the king always won when he played a game of tennis.

A masterful and witty social history of five centuries of royal life, Behind the Throne offers a grand tour of England’s grandest households.

Why read Behind the Throne?

Ha ha. Did you read that blurb? “Monarchs: they’re just like us.” Um no, not really! But that doesn’t mean they don’t have a lot to deal with and that a lot of that stuff isn’t the same old rubbish that ordinary mortals deal with OR, more to the point, that this isn’t a great idea for a book. Because it is!

Anything ‘behind the scenes’ is like meat and drink to a historical novelist. I think this book could be a real gem and can’t wait to get reading it.